Not all great art is divisive, not all divisive art is great, but sometimes art’s divisiveness uniquely points to its greatness. 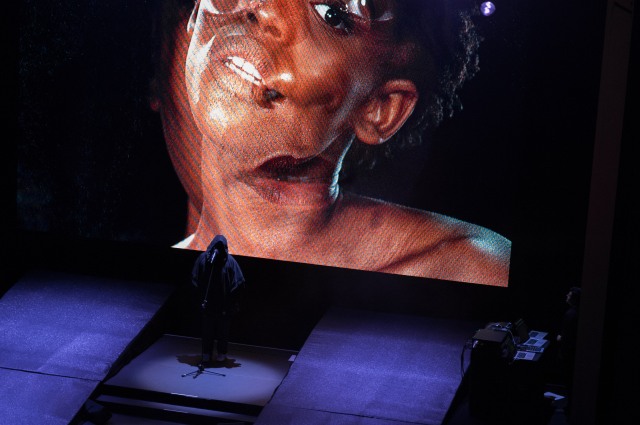 The transition of the artist Anohni, formerly known as Anthony Hegarty, into a woman appears to have had little success in marketing itself to the world. A unique artist whose fearless mixing of emotive chamber rock with intricately crafted baroque pop goes back to her debut with Antony and the Johnsons, her first release under the name Anohni, Hopelessness, was followed and acclaimed by most music critics and bloggers presumably familiar with her former band. In the blogosphere concerned with social justice, critique and identity, which blew up with discussion over Grimes’ 2015 release Art Angels, her new work and persona has flown largely under the radar. My own experience is largely consistent with this division- from my groups of friends who are attuned to any kind of art charged with political commentary, few had even heard of Anohni. Yet, her concert at the Sydney Opera House for the Vivid Festival, for which tickets sold for $85 and up, was sold out.

The reason for this became crystal clear when I took my seat at the Joan Sutherland Theatre, and watched Anohni walk out on the stage and spread her wings while under the black veil that would cover her face the whole show.

The show was punished by pundits on The Monthly and The Sydney Morning Herald, recordings uploaded onto YouTube received a range of negative comments, and people walked out of the show, presumably frustrated at her new incarnation in spite of the popularity of her older material. Yet there is no doubt in my mind that the show was brilliant and stylistically consonant with the intended political message.

These commentators relied on a range of misguided reasons for their distaste of the show. They decried the fact that, conceptually, it was closer to performance art than musical performance. Which is to not only severely underestimate its profound merit as a form of performance art, but also drown out the subtle message that there is an element of performance art within all contemporary musical performance. They decried the presence of supermodel Naomi Campbell and the use of various women of colour as actresses for the lip-syncing background animations throughout the show. Bearing with ease the hypocritical assumption that any depiction of racial minorities can only be legible as a commentary on race, and should therefore be judged on those grounds. They decried the directness with which Anohni’s artistic hammer struck upon emotional strings. Naturally overlooking the manner in which the overload of anxiety, desire, and emotion in general reflects the way these operate in our lives to detach us from forming real connections.

The most divisive aspect of her show was undoubtedly her appearance behind a black veil throughout the entirety of the show, effectively denying the audience any view of her face. Critics claimed this foreclosed any possibility of personal connection and let the show fall back on its production aspects (sonically, the show was produced by Oneohtrix Point Never and Christopher Elms, who appeared on either side of the stage), letting Anohni get away with lip-syncing through extensive sections of it. Given the option of reading it as a critique on the cult of celebrity harvested by tours and musical festivals, they politely declined. Anohni’s choice to express her personal estrangement from her body was not relatable enough for them. Nor did they allow themselves to be moved by the way in which Anohni defied any objectifying gaze through the dissonance between her dance movements and the caustic words of her disembodied voice. Evidently, the staging of an environment of surveillance and manipulation/control was too nuanced for them.

Nobody made clearer the character and ideology of these misguided attacks on her art than Anohni herself, when she replied to Anwen Crawford’s negative review in The Monthly. I quote her reply-

Now it is not white men but white women such as yourself who assault me, and I realize that i am getting closer to, and not further away from, the source of hatred for the feminine when I encounter you. All you know is that you seek to hurt me, white woman, under your smug assessment that I am a racist appropriator.

Your “mendicant” reaching towards Beyonce for a sharing of womanpower is a sham. The true depth of your comprehension of “sisterhood” lies here, in your attempt to disempower me.

Crawford even questioned the depth of Anohni’s commitment to her allies, especially the Martu artist Ngalangka Nola Taylor, whose message featured as the final segment of Anohni’s concert. Yet Anohni’s actions speak for themselves. She is preparing herself to walk 110 miles across the Western Australian Desert in support of the campaign of the Martu people against Uranium mining on their land.

Anohni’s comments reveal the ideological ground upon which Crawford, and probably other critics, rest their arguments. It is that of liberal commentators who are willing to engage with art and critique but only through particular tropes and discourses designed to suit their privileged status as commentators and social agents. Purportedly beyond vulgar cultural appropriation, they now co-opt the strategies of oppressed agents who seek not to have their otherness recognised by the mainstream, but to use it to fundamentally challenge the basis for the mainstream.

Their critique loses its thoughtful, academic veneer the moment art falls outside of their emotional and political range. Anohni’s art is intended to make its listeners and viewers uncomfortable as it presents in explicit terms the contrast between a sweeping, at times beautiful production aesthetic and caustic lyrical bombshells. It allows one release while withholding catharsis as it registers the imaginative boundaries of a society mired in frustration and apathy. The disconnect between body and self which have characterised Anohni’s identity as a transgender woman no doubt make her particularly attuned to these gaps that her art explores. Liberal society’s polite and inclusive acceptance of the LGBTIQ community renders invisible these uncanny aspects of identity which are powerful precisely because they are beyond legibility or cognition.

“Four Degrees”, provocatively released just before the Paris Climate Conference, is an exemplary of this attitude- it neither laments the destruction of the Earth, nor nostalgically extols nature’s greatness, but rather speaks in a voice that appears to celebrate its role in the Earth’s destruction. The more conventional narrative of hope amid decline, which has adopted a certain cognitive dissonance as the gap between the two has widened, foreshadowed an album where hopelessness at our external conditions is inextricable with our individual responsibility for and enjoyment of those conditions. The album’s divisiveness is a sign of this dissonance which it exposes.

It is a standpoint which various other writers and artists, among them Slavoj Žižek, and some science fiction writers, have been attempting to capture, as the dissonance present in mainstream forms of art and expression have descended into self-parody. The lip-syncing women whose faces were projected behind Anohni on the stage, express a range of profuse emotions characterised not by their subtlety or redemptive qualities, but by their ambiguity as they grapple with profoundly contradictory positions, in which despair can be an act of defiance. The show, just like the album, asks to be resisted, fought, and eventually overcome, as it takes the subjective position of hopelessness and pushes it to the point where it transmogrifies into hope, pointing to an uncertain future where all past comforts and signs of progress might be abandoned in favour of new forms, a true subjective liberation.

Anohni’s art is powerful precisely because it comes from a different place. At times she is far from subtle. The song “Obama” is caustic both in form and message and will no doubt further estrange liberals already alienated by her ambiguous yet uncompromising expression of gender, those who voted in a “truth-telling envoy” on whose watch true reform was abandoned. Likewise, Vivid Festival commissioned a singer who made a name for herself by singing with a poignant and soaring voice that sends shivers through small theatres, yet got a divisive virtuoso, a scathing bard. If we listen with our hearts, we might just hear how hope and hopelessness are two sides of the same coin.

← New blog- The Shattered Cup
Reflections on a storm →